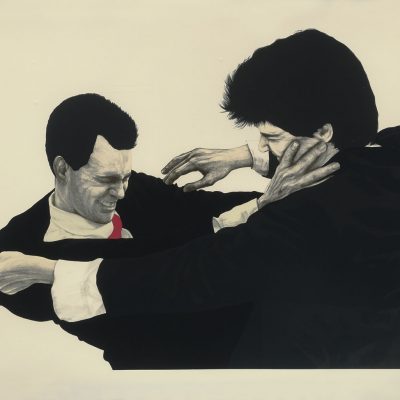 American Painter, Sculptor, and Filmmaker, Robert Longo is famous for his bold and photo-realistic drawings and works on paper which focus on the position and function of politics and power within our society. Longo became well-known in the 1980s for his “Men in the Cities” series which depicted sharply dressed men and women in energetic and contorted gestures set against a white background. Born in 1953 in Brooklyn, Longo had a childhood obsession with mass media which has clearly influenced his artwork. “My work exists somewhere between movies and monuments,” Longo explains.

Longo attended the University of North Texas, before transferring to Buffalo State University where he studied along with fellow student Cindy Sherman. After graduating in 1975, Longo moved to New York City to become join the infamous downtown Art and Music scene. He became a dominant figure in the “Pictures Generation” of artists who opposed the minimalist and conceptualist movements that were beloved in the 1960s. Longo’s drawings are heavily influenced by his study of Sculpture as he states that “I always think that drawing is a sculptural process…I always feel like I am carving the image out rather than painting the image”.

Over his career, Longo has created both drawings and sculptures that highlight issues surrounding masculinity, power, mass media, and urban lifestyles. He has been critically recognized for his “Men in the Cities” series as well as his depictions of American flags painted over in black, just to name a few. For the “Men in the Cities” series, he photographed his friends leaning backward and falling forward. After enlarging the pictures, he drew them, exaggerating their poses. These works portray the individual’s alienation within a complex society.

He has gone on to have his work shown at the 1983 and 2004 Whitney Biennial in New York and the 47th Venice Biennale. Longo currently lives and works in New York, NY. 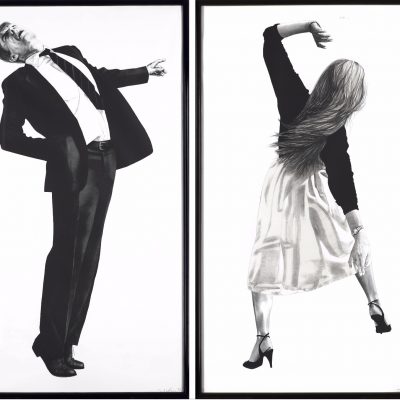 Men in the Cities by Robert Longo