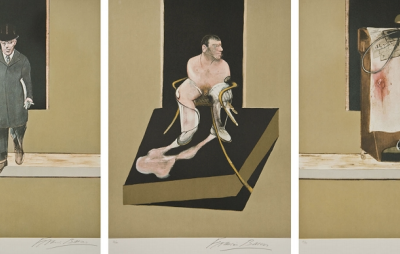 The artist Francis Bacon was born to English parents living in Dublin, Ireland, on November 28, 1909. After traveling to Germany and France as a young man, he settled in London and began a career as a self-taught artist. Most of his paintings from the 1940s to ’60s depict the human figure, in scenes that suggest alienation, violence and suffering.

He devoted himself to painting and began creating the works for which he is still remembered. These were large canvases depicting human figures—most often a single figure, isolated in an empty room, in a cage or against a black background. For one series of paintings, Bacon was inspired by Diego Velázquez’s portrait of Pope Innocent X (circa 1650), but he painted the subject in his own style, using dark colors and rough brushwork and distorting the sitter’s face. These works came to be known as Bacon’s “screaming pope” paintings.

In other works, a figure might stand beside a flayed carcass of meat. Still other paintings were derived from traditional religious subject matter such as the crucifixion of Christ. In all of his paintings, Bacon emphasized the universal experiences of suffering and alienation.

The Artist, Francis Bacon, in his studio

Francis Bacon ‘s provocative, expressive artwork, painting, prints are considered some of the most important art of the postwar era. He died in Madrid, Spain, on April 28, 1992.