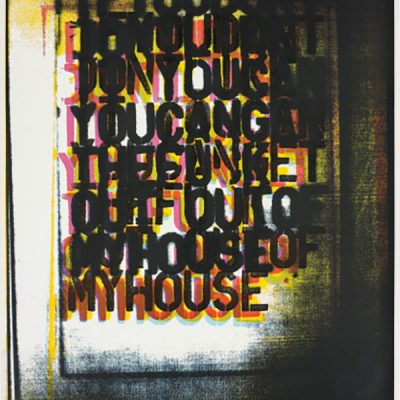 Since the 1980s, American artist Christopher Wool’s art has incorporated issues surrounding post-conceptual ideas, bringing the lineage of conceptual and minimalist art to bear on abstract painting. Wool is best know for his paintings of large, black, stenciled letters which he began to create in the late 1980s after being inspired by graffiti in New York. The paintings use a system of alliteration where words are often broken up by a grid system make them disjointed to read.

“In the 1980s, Christopher Wool was doing a Neo-Pop sort of painting using commercial rollers to apply decorative patterns to white panels. One day he saw a new white truck violated by the spray-painted words ‘sex’ and ‘luv.’ Mr. Wool made his own painting using those words and went on to make paintings with big, black stenciled letters saying things like ‘Run Dog Run’ or ‘Sell the House, Sell the Car, Sell the Kids.’ The paintings captured the scary, euphoric mood of a high-flying period not unlike our own.” – Ken Johnson, The New York Times, 2000.

Wool was born in Boston in 1955 to a molecular-biologist father and a psychiatrist mother. He grew up in Chicago, before moving to New York City in 1972 to enroll in Sarah Lawrence College and shortly after the New York Studio School. His formal education was short lived but he continued to immerse himself in the world of underground film and music.

He has exhibited extensively around the world in many solo and group exhibitions including the Museum of Contemporary Art, Los Angeles (1998) and the Solomon R. Guggenheim Museum, New York (2013). In 2015 Wool’s monumental black and white word painting Riot (1990) sold for $29.9 million at Sotheby’s New York, reaching a auction record for the artist.

Wool currently lives and works between New York City and Marfa, Texas, together with his wife and fellow artist Carline von Heyl.