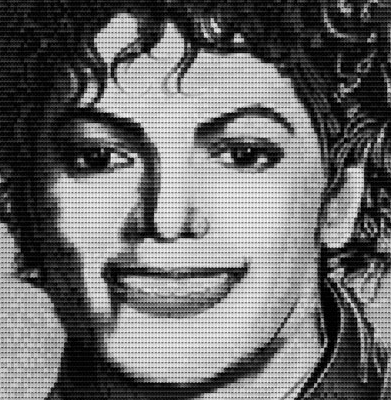 The most recent body of work by Alex Guofeng Cao is a series of images of popular culture icons.  At a glance almost anyone can identify some if not all of the characters in the menagerie of stars.  But, upon closer inspection, one can see that these stars are composed of a constellation of tiny repetitive images each slightly differing from its neighbors.  The arrays of minuscule visages that compose and conspire to form the larger portraits are iconic images themselves.  The plot thickens as one realizes that there is a play, a dialogue between the chosen characters that inhabit each other.

The method of creation for Alex Guofeng Cao is really that of composing a mosaic of memories into an impression of the present.  Impressed and greatly influenced by the ideal forms and proportions of the iconic and statuesque sculptures of the ancient Egypt, Greek and Roman eras, Cao’s works can be said to have their roots in western antiquity.  Another great source of inspiration are impressions from his trip a decade ago of the mosaic floors and walls of Naples and Pompeii. It’s the combination of these two base strategies that allows Caos’ works to take shape.

The images are imposing and arresting to say the least.  With their immense dimensions, their presence can be felt from quite a distance away.  The powerful over-sized main images and the armies of tiny images that compose them are specifically paired to create a dialogue.  The histories and backgrounds of each of the characters are pitted against each other.  The image of Marilyn Monroe is populated by countless diminutive images of the Mona Lisa.  These two women are, arguably, the most famous women in the world.  They share an unusual bond in that they are both, in some ways, fictional characters.  The pairing also suggests another connection in that they are both fantasies.  One is the fantasy of the 20th century and the other is the singular fantasy and imagination of DaVinci.

As one looks closer and closer at the images and scrutinize all the intricate details, one may begin to realize that hidden within the sea of tiny repetitive images are carefully chosen codes and clues that the author inserted in strategic locations, as a reminder of the events and situations in which these characters were involved in history.

In the end, the process of encoding and layering of information of the times is ultimately the goal.  As time passes, so does information get deposited into the works.  These images undergo evolution and change as time passes, and they bear the marks of a collection of history, as well as the author’s intent.