Michael Manning is trying to bring back the Fun into Modern Art. Although he works in digital mediums, his art is spontaneous and sincere. Michael Manning says,

“I don’t like to take any single piece too seriously, I want to work on something without the pressure of it being perfect. I think people discount producing a lot of work because they connect it to feed culture like it’s more important to produce massive amounts of content for tumblr or instagram or w/e but that’s not really what I’m trying to do.”

The 28-year-old, Los Angeles-based artist felt that contemporary art had gotten too somber and self-serious, so he put on Sheryl Crow‘s Pandora station and created these happy paintings on his iPad, then digitally transferred them to canvases. To add a touch of traditional painting to the works, he then overpainted the canvases with brushstrokes of clear gel to create a faux impasto effect. 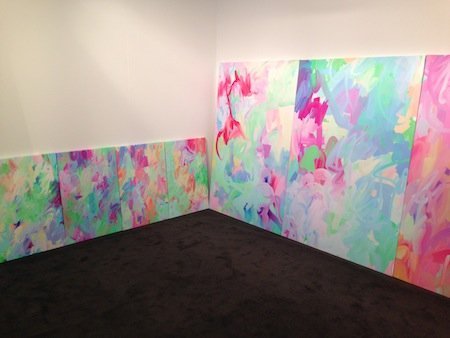 Michael Manning is the prolific digital art pioneer coming to a gallery, Tumblr blog or – if you’re in the vicinity of Southern Cali – Microsoft retail store near you. Manning – find him online under his chosen alias, mirrrroring (4 Rs) – absolutely smashed the recent Phillips Paddles On digital art auction in London with his piece Chinese Broccolini Torta: a canvas combining digital print with acrylic paint in his idiosyncratic style. Whether he’s invading computer stores and making art on their displays (turns out, none of the staff took much notice), or working on hundreds of variations of the same animation on various corners of the web, Manning has turned the humble jpeg into a radical artform.