A popular Graffiti artists, POSE turned to painting. His attempt at making sense of the environment around him started with graffiti, and has matured into a body of work with multiple dimensions and layers that are a pop blend of illustration, lettering and comic book aesthetics. 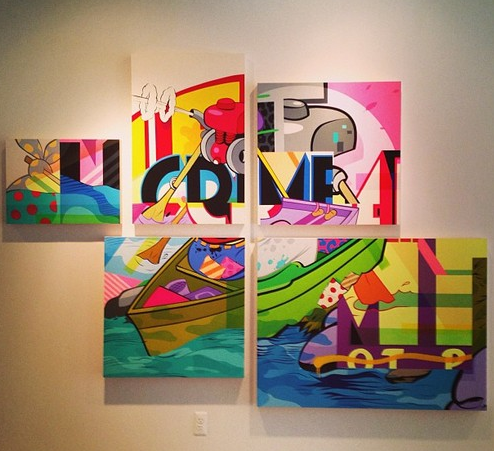 “My artwork is pretty cut and dry,” POSE says. “I’m taking from the world around me – whether it be bits of signs, or my wife’s old, childhood books.”While his work relies on harnessing very simple human emotions like love, loss, and triumph, it’s presented in a complex union of vivid colors and layered application which aims for something much more profound than is at the literal, surface level. 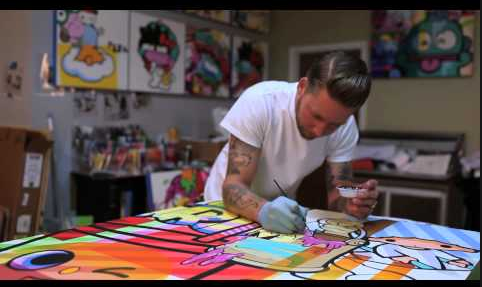 POSE in his studio

Pose (Jordan Nickel) was born in 1980 in Evanston, Illinois, and is currently based in Chicago. He began practicing graffiti in 1992 and received a painting degree from Kansas City Art Institute in 2004. His studio work is strongly informed by his graffiti experience and his immersion in traditional sign painting. Pose is a member of The Seventh Letter, an acclaimed West Coast artist collective and Mad Society Kings (MSK), a world-renowned graffiti crew. Pose has painted murals all over the world. In 2013, he and fellow MSK artist REVOK were invited to collaborate on a mural for the illustrious Houston/Bowery wall in conjunction with their first two-person exhibition at Jonathan LeVine Gallery.

Named “One to Watch” by CNN in 2015 as part of their international television series that shined a light on up-and-coming creative talent set to be the next big names in culture, modern pop artist, POSE, has been applauded for his inventive ability to take every day, throw-away things and introduce them into the world to communicate something much deeper.