The subject of ‘Dollar Bills’ had provided the motif for Warhol’s breakthrough series of 1961, which in turn had prompted his revolutionary exploration of the silkscreen process for creating his paintings. Twenty years on Warhol revisited the subject of money, this time focussing on the elegant curvilinear form of the dollar sign itself. Unlike the monochromatic and static 1961 ‘Dollar Bill’ paintings, Warhol’s 1981 ‘Dollar Signs’ pulsated with vibrant hues, layered energy, as if celebrating the artist’s mastery over his adopted medium. Based on one of Warhol’s own drawings, the stylized $ motif here seems to reverberate in crimson red, pink, and gold against a baby-blue background. In his seminal 1989 publication on the artist, David Bourdon reflects, “Warhol’s Dollar Signs are brazen, perhaps even insolent reminders that pictures by brand-name artists are metaphors for money, a situation that never bothered him”. 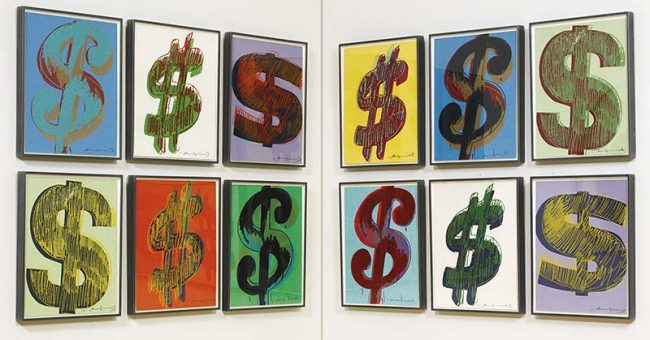