An Interview with Tim Gatenby

An Interview with Tim Gatenby

Can you give us some more insight into your inspiration for subverting these classic cartoon characters and motifs? Where did this all start?

In a world where there constantly seems to be so much drama and conflict with news and media selling impending doom everyday it’s nice to see how classic cartoon characters can provide a brief escape.

By using pop culture references like cartoon, music or film characters I feel that you can instantly create an understanding for whoever is looking at the image. I’d like to create work that anyone can enjoy and get, on a surface level you don’t need to be into ‘art’ to appreciate it. By creating something that is readily accessible and entertaining it’s the possible to use this framework to explore other ideas in the pieces.

I’ve always had a passion for film and studied it at university before going on to study classical painting in Italy. A few years ago I starting trying to combine these passions and experiences a sort of old-meets-new mash up. 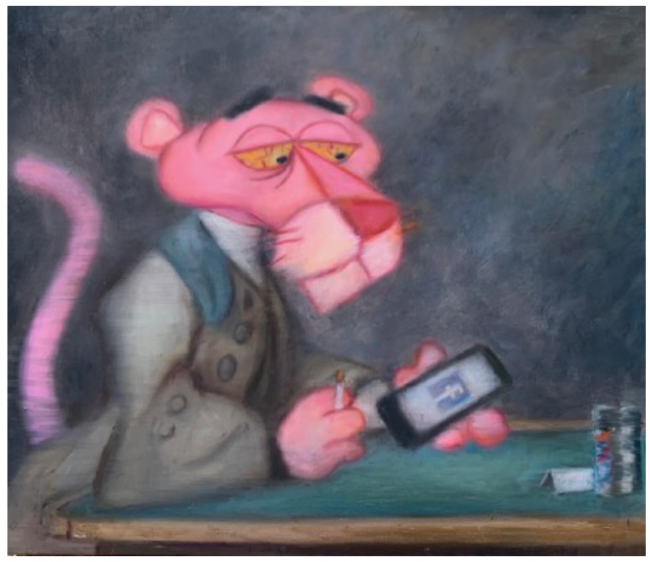 Your paintings present the idea of nostalgia with more sinister undertones – do you view your pieces as “sinister” or do you feel it’s more of a distortion while still keeping the light hearted aspect?

Guess I was always a bit of a class clown so I suppose in general my paintings are meant to be light hearted, there’s often too much heaviness in painting due to it’s ‘stiff’ nature. As I trained in classical painting in Florence I get a kick out of the juxtaposition of a trashy cartoon painted in an old master style, it sort of elevates the a subject matter which you wouldn’t necessarily expect to see. One thing I set out to do is make work that can put a smile on your face, it seems like a challenge to create a painting that could generally make you laugh. Laughter and amusement is such a powerful part of being alive so for me it’s an emotion to embrace. 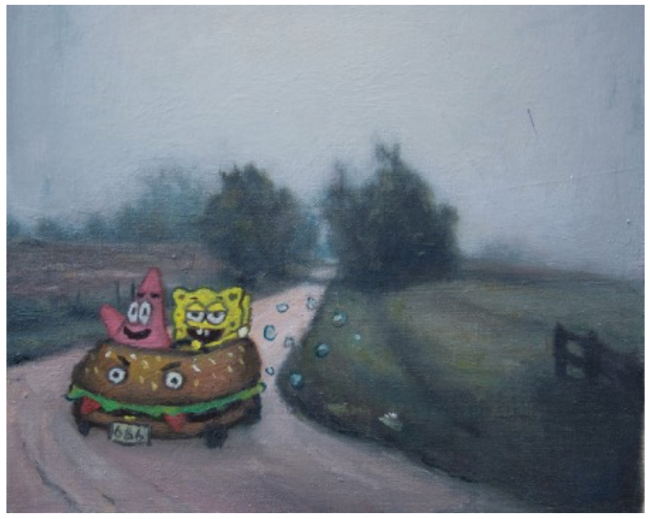 Kings of the Road by Tim Gatenby

Do these paintings relate back to your childhood? Or did you begin to watch and study these shows later in life?

A big part of painting the characters is to create a time machine or portal transporting you back to childhood memories and youthful irresponsibility. Most people in the world must know Mickey Mouse or The Simpsons, they are so far reaching that they’re embedded in the image-conscious of the world. Collective-consciousness is something that really interests me, like does society have a predetermined idea of where it’s going or is our experience based on an amalgamation of random circumstances responding to one another? I hope that by analyzing visual experiences from my youth with a sense of adulthood I can understand this passing of time a little bit better.

Could you give us some insight into your process and decision making when creating works? Your technique almost gives the works and imagery a bit of distortion – seeming to be blurred or washed out. Is there intention behind that?

Blurring of paintings helps to create a distance between the image and the viewer, when I painted British poet John Cooper Clark he described my work as, ‘like something from the mists of time’. For me, paintings are ageing from the moment the artist stops painting on them, 500 year old paintings did not look the same when they were completed as they do now. So in one respect the act of looking at a painting is like looking through a window into the past only the window is slightly cloudy and distorted by time.

For me, soft transitions create a degree of abstraction to get this effect I will paint the whole image in one go then take a big brush and blur the paint so that the transitions are all as soft and fluid as possible. This means that the eye can pass more freely over the paint as the colours bleed without rigid structures and form. 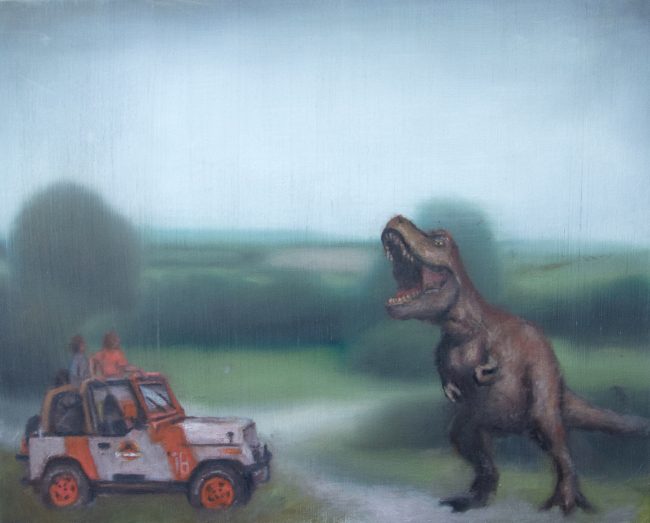 What’s one thing we can always find in your studio?

You’ll often find my cat, Arthur, popping into my studio to help me with my crits. He knows he’s not really meant to be in there because I don’t trust him not to get paint on his paws an walk it all over the place. I think as he knows it’s out of bounds it makes him even more mischievous and determined to get in.

Your work touches on primarily American cartoons and movies – being based in London, do you ever explore themes that are popular in your hometown?

There is definitely a majority of American references in my work, I lived in San Francisco for a year in my twenties so feel a certain affinity towards the states and I think American culture has such a far reach that makes the main content of the painting extremely accessible. For example, I have painted the Teletubbies a number of times which has a broader appeal but more niche characters like Mr Blobby are relatively unknown outside of the small island i’m from. I have a number of English themed projects I am currently working on but I suppose when painting a different culture you are slightly more removed so it gives you an interesting perspective. Recently I finished a painting of Shakespeare swearing with his middle finger that I’m quite happy with, I’m from Stratford-upon-Avon originally which is Shakespeare’s birthplace so his personality has had a huge impact on my life. 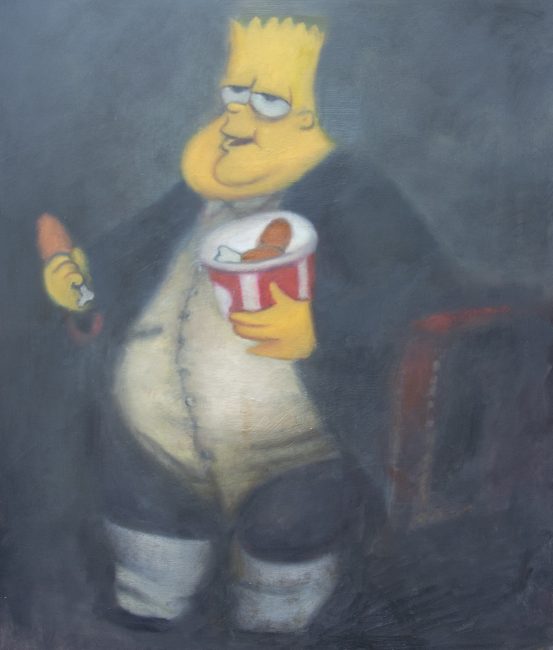 Any upcoming projects or collaborations we should keep an eye out for?

At the moment I’m looking forward to working with Guy Hepner Gallery as well as an exhibition that keeps getting postponed due to Covid with Plan X Gallery. For a while I’ve been in talks with galleries in Taiwan and Hong Kong about potential toy release which is something I’m really keen to do.