An Interview with Dan Alva

An Interview with Dan Alva

Leading up to the exclusive print release with Dan Alva and the Tax Collection launching on November 14th, we are pleased to share an in depth interview with the artist and his series, The Outsourced.

The Outsourced Series is a modern reinterpretation of old master paintings using original materials and methods. The series has become my very own MFA in Art History. It’s been in the works and under research for about three years, but this last year I really kicked it off. Aside from the painting itself, my favorite part has been these forced collaborations between dead masters that never would have happened back in those days. For example “Sleeping with the Fishes” has Da Vinci, Rembrandt and Van Gogh all in one.

The print release will have a few hand embellished versions as well?

The print run consists of two oil paintings called Make It Till You Fake It and Thick as Thieves, each of which will have 25 prints. Cosa Nostra will have five manually embellished versions to which I will be adding gold-leafing and adding additional paint layers. I don’t typically produce print versions of my work, but I think Tax Collective is a great partner as they have a wide audience of younger collectors who wouldn’t otherwise have access to the original pieces.

How has working in advertising for the past 15 years affected your perception of the “art world” and “art” itself?

Art and advertising go hand in hand. There is an art form to selling anything and to the way a product is presented. I realized at some point that I started to plan my series like an ad campaign. Concept – Sketches – Mock Ups – Executions – Final Deliverables – PR Plan.

Your work has quite a large range – from free standing sculptures to neon and oil on canvas – do you have a preferred medium? Can you tell us more about the evolution of your style?

I have always looked up to artists like Dan Colen and Damian Hirst that create a series of works, and then move on to the next concept.  I go through phases, and I’m still searching for my “style,” but The Outsourced Series has been my favorite thus far.  It’s a labor of love and, as I mentioned before, it’s a thesis of sorts. I plan on doing it for a while until my ADD kicks in again.

What can we expect to see from you within the next year?

The Outsourced Series will be featured in this year’s Art Basel for the very first time at CONTEXT. Besides my framer and a few confidantes, the works haven’t been seen by anyone. I’m looking forward to getting them out in the public eye and hearing the feedback. I think you’ll see more of this series, but maybe in a different medium, with a new spin on it.

What’s one thing we can always expect to find in your studio?

Water. Lots of water. I work out of a warehouse in an area called Allapattah near Wynwood. It has no AC and the Miami summer is brutal. It’s how I gym. 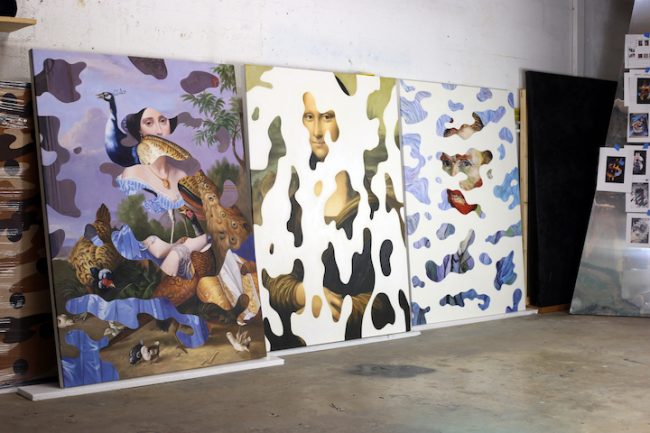