An Interview with Cooper

An Interview with Cooper

On April 15th, Guy Hepner and The TAX Collection are excited to release a collection of canvases, works on paper, and prints with painter and muralist, Cooper. We caught up with the artist to talk plants, fashion, and his inspiration behind the upcoming release. 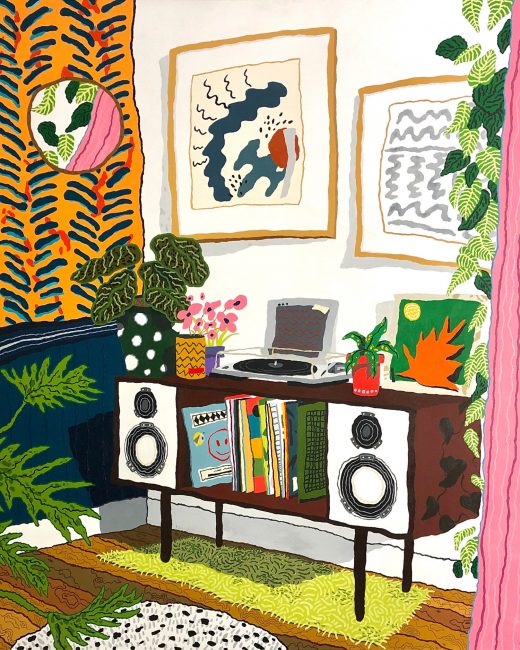 Do you want to start off by talking about your background a little bit and how you got started painting?

Yes. I went to Ball State University in Indiana and I went to art school. It was for graphic design so I got to take all of the painting classes on the side – woodworking, all that kind of stuff. So that’s kinda how I got into it. Growing up I always had notebooks at home just to mess around here and there. So art school did that. I moved to Miami two weeks after I graduated and took a graphic design job at a record label. I stayed there for one year and it was really fun. You’re around famous people, just like fun music, artists’ stuff. It’s really cool. But I was going home and painting, just trying to be my own artist. I didn’t want to just do shit for them. I was just trying to find things I’m inspired by. That lasted one year and then I quit and moved to Los Angeles with a couple of buddies. No money, just like let’s do it. From there on, it was just alright. I got a little bit of money and I knew I had to figure my own thing out or else I’m going to go crazy. I started painting different stuff. I did a lot of vans and sold those on my website, through Instagram and stuff like that. Then I started to reach out to people and slowly try to find my way. That was years ago. I’ve been on my own for about three years now.

What was the process of finding and developing your style?

For me, it was so inspired by the artists I’m into. Everyone’s like, Oh, I like that guy. I’ll draw some of his stuff. And then after a lot of time of doing it, it slowly morphs into more of just you in a way. I pull a little bit from this guy, pull a little bit from here, and then you eventually kind of create your own world. You find your own style just by doing it as much as you can really.

Who are the artists that inspired you?

I would say David Hockney was the first artist I ever found that was just so vibrant and colorful and really inviting. I was like, Oh, that just looks like a good time. I want to share that same energy with the world. Definitely Jonas Wood, he’s another plant guy. And then Basquiat, definitely. Everything I do is like color blocking, so I’m trying to get out of that a little bit. I’m trying to expand. With my freaking graphic design brain, all I can see is colors. So I didn’t really ever learn how to shade and stuff like that. I studied their work a lot and spent a lot of time looking at those three. 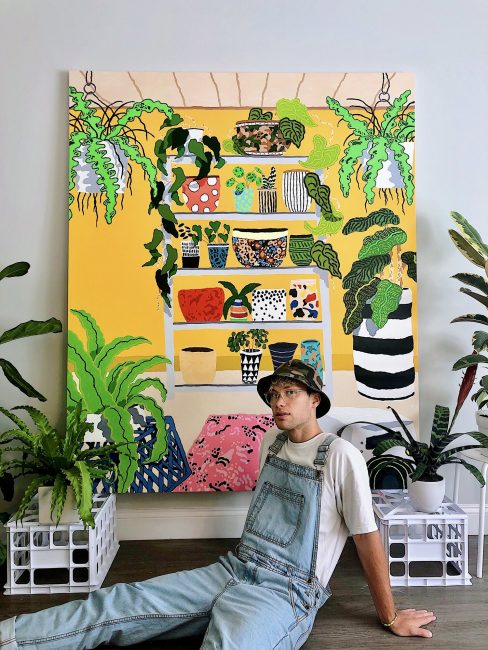 On The Shelf by Cooper

What first attracted you to plants as a subject?

I got a shit ton, to be honest. They’re just fun. Especially in LA, it’s in a lot of interior design which I like. And I just thought like vibes. You can put different patterns on this and that, definitely with the vases. It’s something you can grow. I don’t have kids so it’s something to do to contribute to the world in a way.

What are the best and worst parts of being a plant dad?

I would say the best part is when they’re doing really well and growing quick and fast. That’s fun. The worst part is I overwatered forever in the beginning. I was just giving them too much love, I guess. It’s definitely been a lot of trial and error. That’s the worst part, killing them with too much love.

Many of your pieces bring inanimate objects and interiors to life. What do you hope people see when they look at your pieces and the worlds that you create?

I just want it to be a positive radiating energy. The colorfulness, the vibrance. Basically, a world of mine you’re stepping in. It’s just like a world of love, to be honest. That’s the most important part about life – sharing that and trying to live in that way. That’s what I want the viewer to see and take in. 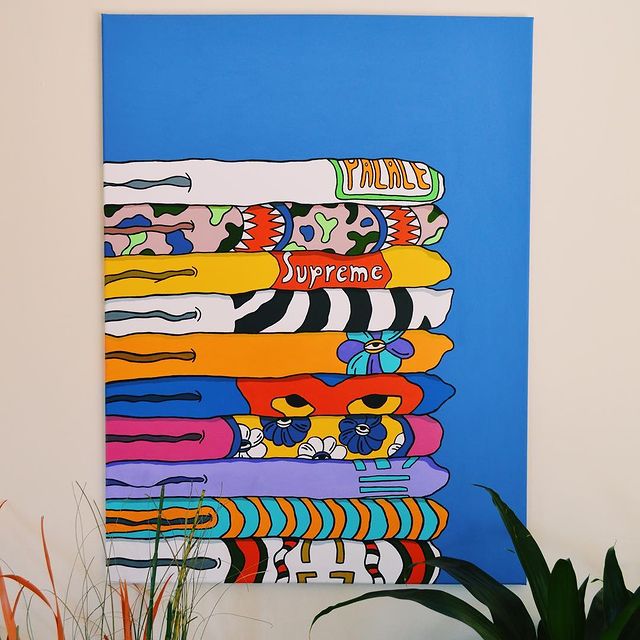 Shirts of the Week by Cooper

Your Instagram bio says “Happy Hype.” Looking back at some of your earlier pieces, you can see the influence streetwear and fashion have on your work. What is it like to have your art be made into wearable clothing?

I actually just thought of the “happy hype” thing probably two or three weeks ago. It’s happy, the art is happy. Then it’s kind of Hype as in hype beasts, all of that. It’s basically just a bunch of patterns formed to create this bigger object. And I thought of that and I was like, I don’t know if that’s a thing already.

I like all the art, whether it’s fashion, canvas, music, or whatever. I definitely want to start doing a little bit more with brands or something in the future, create a fabric or something like that. It’s just super cool to have your own vision and see other people are rocking it. Oh, this is cool. I’m going to wear this. That’s just a super cool feeling.

You’ve done a lot of collaborations between brands like Vans, Puma, and Adidas. How do you feel about the influx of art into consumer culture?

To me, it seems like the older gallery artists who just do gallery stuff are the ones bash on that. It’s a whole different thing – street art rather than just putting a canvas in a gallery and then that’s all you do. I think it’s great either way that it can be done.

I don’t have a problem with it. I enjoy it. I’ve done it. I’ve worked with several brands. I really got my start by working with other brands and making money to be able to support my career, so I can never look down on that or people who do it that way. You reach a new audience, so that’s always fun. 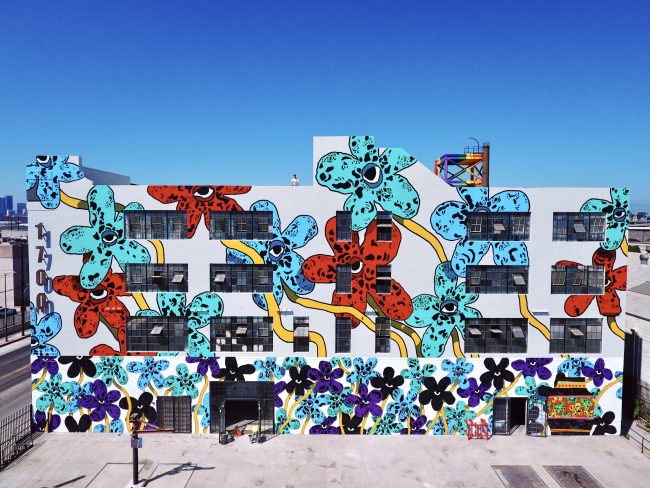 Your paintings have been translated into murals, installations, clothing, and even an animated short. Is there a medium you’d like to see your work in that it hasn’t been turned into yet?

I don’t know if it’s like etching or something – there’s a black sheet of metal, and then you edge out a drawing and ink it. Then you print it out and you can make prints. That would be super cool to work with a company who could do etching or some type of print like that.

Can talk about the story behind this release and what inspired the scenes?

I definitely feel like it’s my best work yet to date, just stylistically and everything. I just got them to where I want them. I had two prior canvases, both with speakers and everyone really loved those. I have two more that I’m going to release with this collection and being able to just now show a group of works together, I’ve only done that once before. Being able to show them all on the website together and then just have them all connected, everything just fits so well together. I’m super excited about that. 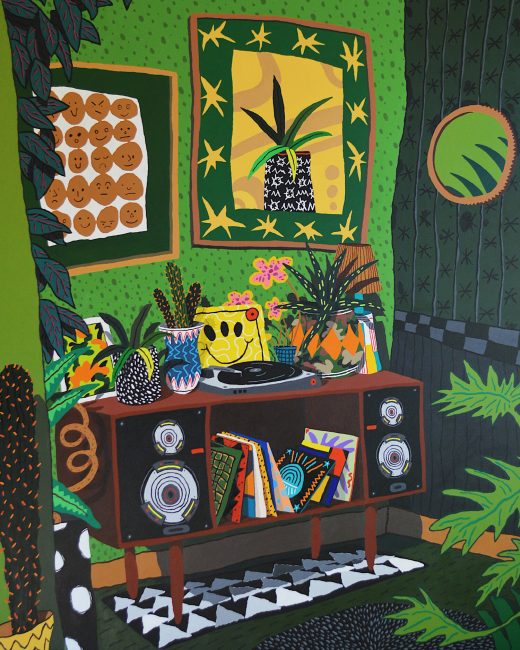 A collection of prints, canvases, and works on paper will be available on April 15, 2021, at guyhepnereditions.com.