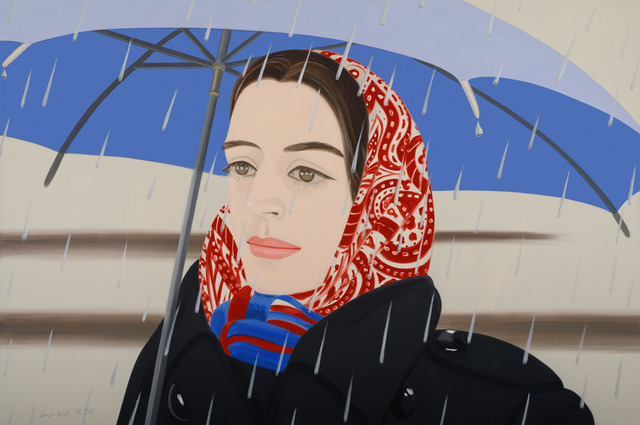 Alex Katz is known as one of the precursors to pop art, although he resents being affiliated with any particular movement. His catalog can essentially be divided into landscapes and portraits. In both cases, he brings attention to cultural markers through the abstraction of realistic subjects. This reductive style is a result of his “paint faster than [he] can think” approach. In the case of Katz’s portraits, this allows room only for significant features. Without the weight of finer details, his paintings successfully capture the essence of both the person and the moment in time. 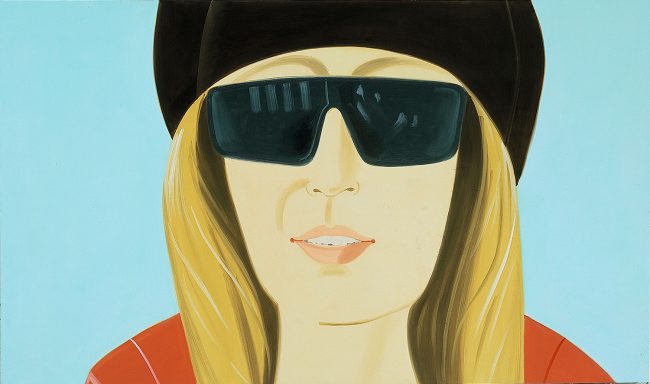 Katz’s portraits usually feature the faces of close friends and family. In the 1950s, he fell in with the group of artists known as the 10th Street Scene. For the next twenty years, he continued painting the private world of artists, poets, dancers, and other colleagues. His wife, Ada, is featured in hundreds of paintings including some of his most famous works. Despite his familiar subjects, the intimacy between Katz and the figures in his paintings is intentionally void. Instead, attention is paid to the “artefects of culture” that inhabit the person. Katz focuses heavily on the style and taste of the individual. His portraits frequently accent the hats, sunglasses, clothing, and makeup choices of the subjects. Much like the pop artists that followed him, Katz is more interested in capturing the superficial than revealing what lies beneath it.

The figures in Katz’s portraits are often cropped, accentuating the “at first glance” nature of his compositions. By constraining the viewers’ point of view, Katz simulates the idea of seeing something at face value. His portraits imitate that first moment of looking at someone before you register the details of their face. This POV experience is heightened by the sheer size of his pieces, which can scale upwards of twelve feet in height. Viewers of Katz’s work are left with the unique feeling of recognition and separation from the subjects they’re staring at.

Katz’s work is centered around the idea of the present. His portraits attempt to replicate moments of blissful ignorance before context can be registered and any deeper meaning is assigned. Katz allows the subjects to speak for themselves, so it’s understandable why he’s averse to being associated with any artistic role or movement. Katz does not need to paint the culture of the time; He paints the people, places, and moments. For him, that’s the most accurate representation there is.