The graffiti artist known as “Alec Monopoly” has found a safe haven for his work through a new deal with DreamWorks Classics and Forever 21, as well as exploring a brand new means of art through sculpture, available at Guy Hepner.

For the New York-born, Los Angeles-based muralist, Alec Monopoly dives into sculpture as a brand new adventure.Taking influence from Jeff Koons “Balloon Dog” series, Alec Monopoly’s Reflective Icons Series of sculptures are electroplated casting compound hand finished by the artist with Acrylic paint. Fitting for his signature icons The Monopoly Man, Richie Rich and Scrooge but wanted to take it a step further by spray painting each sculpture to signify his Street Art and Graffiti origins. “It’s a tough process to have them built. It takes months upon months.” he said. “I’m a graffiti artist so I like to work quickly.” This uprising artist will even have his first solo museum show at the Museum of Contemporary Art in Bangkok in October. 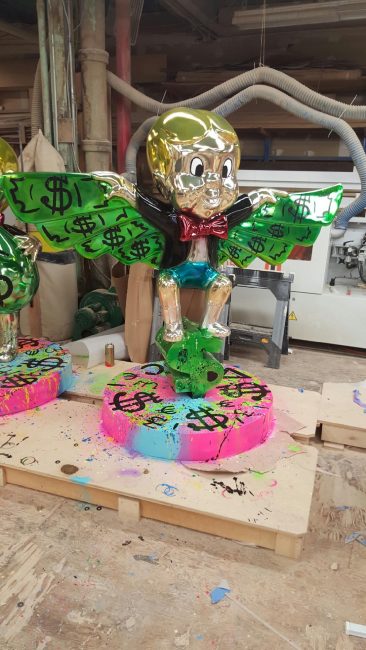 Like the money-grabbing Monopoly man character, the 28-year-old is known for wearing a top hat. “One day my Mom found one that my grandfather used to wear to the opera. I just started wearing it and it became a thing.” he said. His black Rolls Royce with gold-rim tires is another signature look, and the artist is known to do some “phantom surfing” in his Beverly Hills, as in have a driver ferry him around while he surfs on the roof of his car. 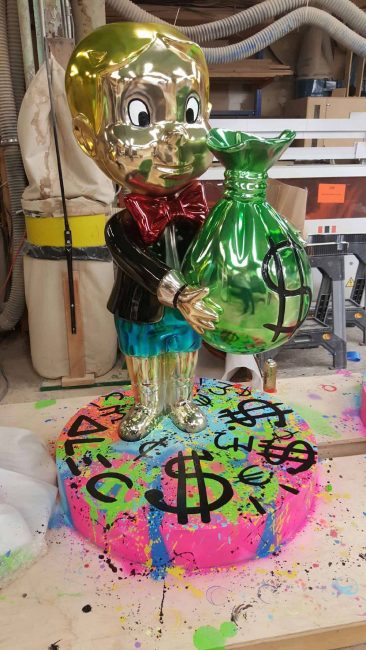 His most recent collaboration, designing a whole array of clothing has been something on Alec Monopoly‘s bucket list. Launching his debut at the colossal New York Times Square Forever 21 Store, there are hoodies, crewneck sweatshirts, T-shirts, canvas tote bags, nail art decor, note pads, a Richie Rich cellphone case and Casper the Friendly Ghost bandanas. In May, he has even gone more upscale by painting an Hermès Birkin bag neon green with the Monopoly Man for Khloe Kardashian. 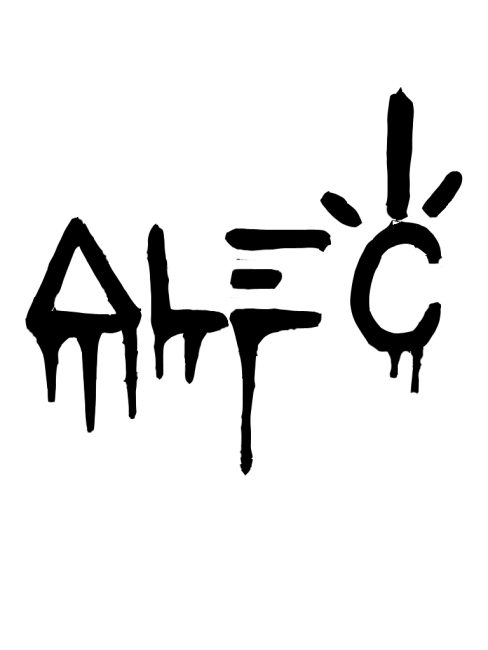 As for the irony of how his Bernie Madoff-inspired career has resulted in his own lavish life, the artist said, “I think about that every day. Being a graffiti artist has taken me all over the world and to all these amazing places.” he said. “For me, it’s all a joke. I don’t take myself too seriously. I’m just a happy person.”