Alec Monopoly is at Guy Hepner and he’s bringing the streets with him.

Who is Alec Monopoly? While his true identity remains a mystery, chances you’ve been to Los Angeles, New York, Miami or London, you’ve probably driven past the Monopoly artist ‘s graffiti murals featuring widely-known, wealthy pop-culture figures from childhood, like the Monopoly Man, Richie Rich or Uncle Scrooge, or his interpretations of celebrity icons such as Michael Jackson, Bob Dylan, Jack Nicholson, Goldie Hawn and Twiggy. 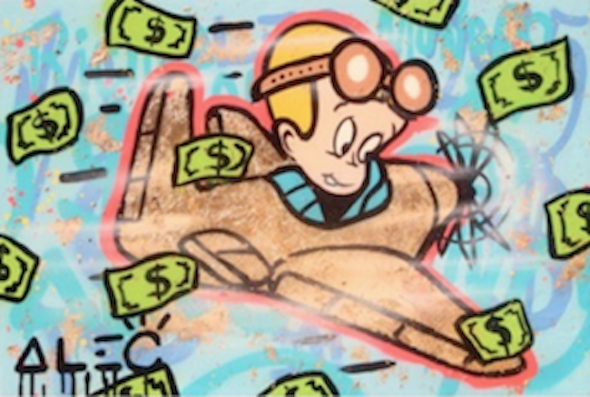 The New York graffiti artist has made his mark all over the country, painting the facade of the numerous buildings and hotels including one giant duck at the SLS Hotel, billboards, a double-decker bus, a fleet of supercars and galleries all over including here at Guy Hepner.

“I was playing Monopoly and watching the news, and I saw Bernie Madoff being arrested. And it hit me, it was like a light bulb.” The New York street artist started painting the monopoly man everywhere! Any empty space, billboards or advertisement posters Alec could find, he began spray painting right over it. And of course, with Alec Monopoly graffiti, there comes an Alec Monopoly price. You couldn’t even count the number of times this bad boy had run-ins with law, he’s even gone as far as jumping down NY garbage shoots to get away. 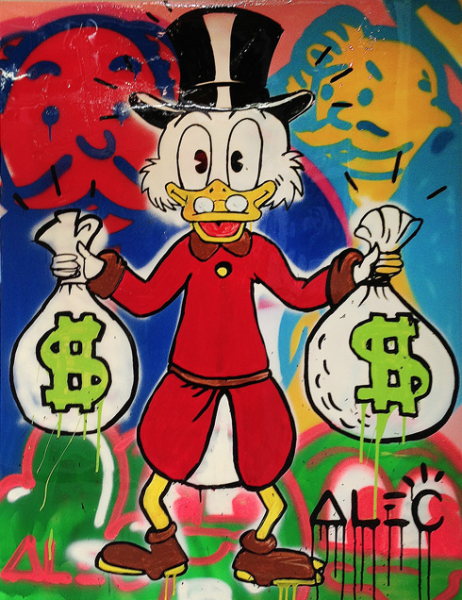 “I like painting for my own happiness. Graffiti is my true passion and I like seeing the reaction of people when they walk by my work and it inspires them.” Alec Monopoly art for sale stands out for his unconventional graffiti style that is colorful, happy and positive, such as Scrooge Money Bags (above) and Island Graffiti Girl (below), rather than a gritty, underground representation in a part of the art world associated with crime and vandalism. He uses spray paint, acrylic, resin and newspaper clippings from the Financial Times and Wall Street Journal for most of his work. 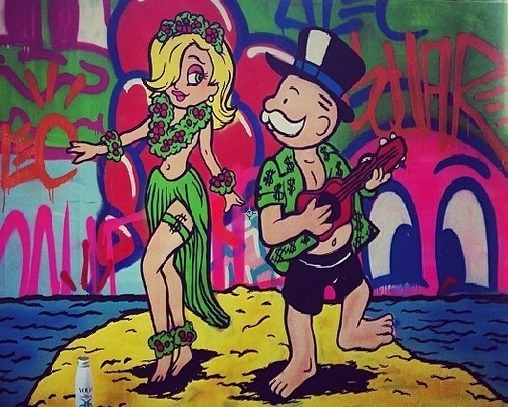