American Street Artist, Alec Monopoly, is known for his colorful and playful adoption of iconic pop characters and in particular the portrayal of Mr. Monopoly, the board game mascot. Harmonizing his Pop Art style with cultural and social criticism and commentary, Monopoly exposes concerns regarding societal hierarchies as well as the “American Collective Consciousness”.  His street artwork and canvases often consist of recognizable cartoon characters that represent wealth such as Mr.Monopoly, Richie Rich and Scrooge Mcduck, often experimenting with textures such as newspaper, forcing the viewer to challenge the notions of politics and power in America.

Monopoly has credited artists such as Haring, Warhol and Basquiat for inspiring his work, claiming that “they were graffiti aritsts who transferred to fine art” and successfully elevated the genre of Street Art. Monopoly clarified that his logo/signature is a response to both Basquiat, with the letter “e”, as well as a reference to Keith Haring with the “c”. Similar to Warhol’s fascination with consumer culture and mass production, Monopoly aims to appeal to the masses with recognizable characters combined with satire. “People can really connect with my work. I create a lot of work that has a positive message; it’s fun and brings happiness to people. A lot of people have found that my work is inspirational.” 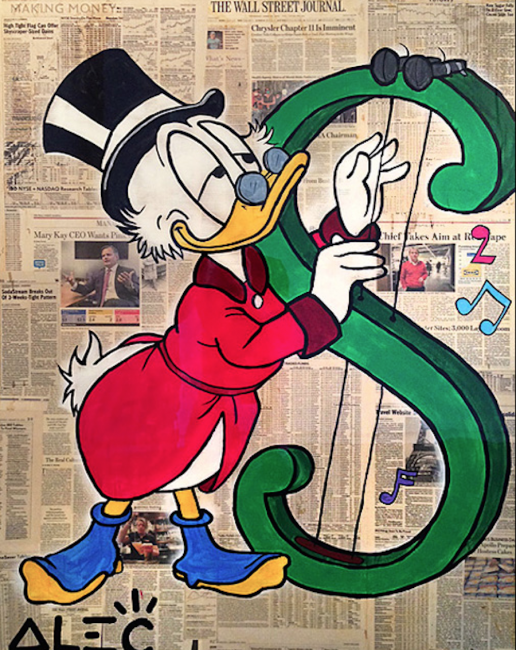 Born in 1986 in New York City, Monopoly appropriated the ‘Mr. Monopoly’ character as his mascot as a response to the economic recession of 2008, and specifically a reaction to the stockbroker Bernie Madoff, as he explains, “I started painting the Monopoly Man in 2008 when the economy started to dip. I was playing the game Monopoly, which I love, and was watching the news where I saw Bernie Madoff being arrested. I remember thinking how ironic that situation was, as he sort of looked like the Monopoly Man.”. Due to his mother being an Artist, Monopoly has been painting and drawing since he can remember, “Growing up in New York, in middle school, every kid has his tag. It’s part of New York culture”. Like Haring’s works, Monopoly adopts simple motifs and imagery, employing bright colors in order to depict serious issues yet appearing in a slightly more positive light. 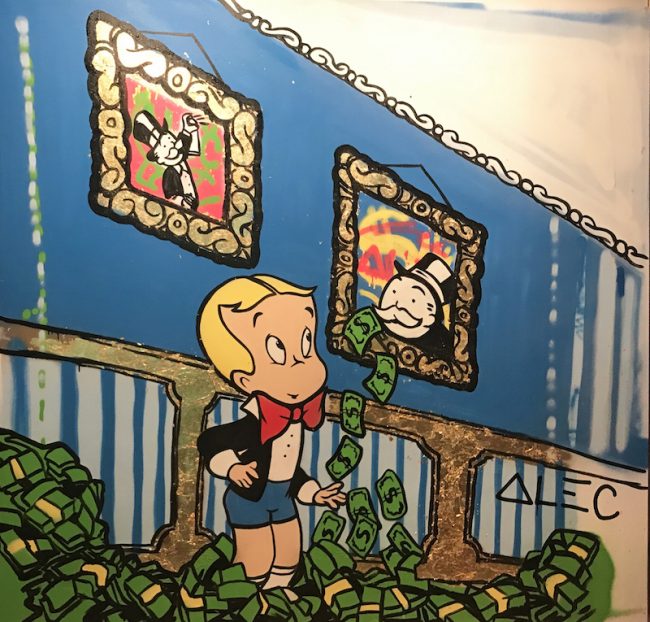 When Monopoly moved to Los Angeles in 2006, he met photographer Michel Comte who invited him to live and work in his mansion. For his canvases, Monopoly works out of his studio where he produces around “70 art pieces per year.” stating that he likes  “making each piece myself.” More recently he collaborated with TAG heur watch brand. For TAG heur, the partnership was a chance to broaden its presence in the art world.  Furthermore, in 2017, Monopoly was one of the top three most searched artists on internet art platforms. 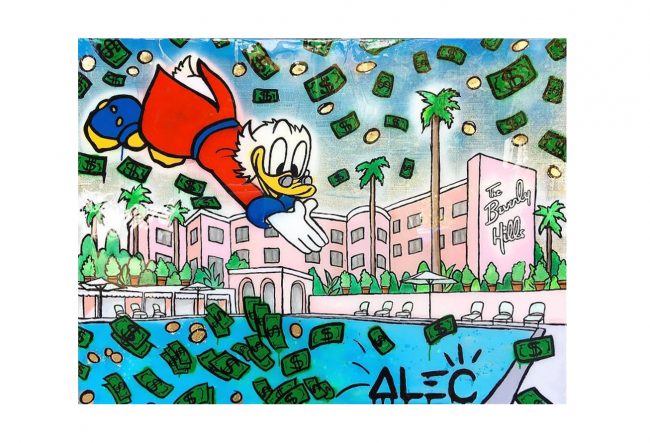