A Conversation with Kristin Moore

A Conversation with Kristin Moore

You mentioned you got your start in the local art scene in Austin. What was that like and how did it help shape you as an artist?

I graduated from undergrad in 2013 and knew that I wanted to go to art school and dive into the art world and my practice more. I went out to California to go to graduate school at Otis. I came back when I graduated around 2016. Instagram was still new-ish and it was hard for an artist to make a full-time career out of what they do. I worked in a gallery for a bit, but I kept seeing other artists have these awesome shows and I was like, I really want to give it a chance – I’m young, why not? So I left the gallery and started working in restaurants and doing pop-up art exhibitions.

It was a lot of hustling, networking, getting to know people, and getting into the community – which was super easy after working at that gallery for a little bit. Basically, just carrying a wagon of artwork around, propping up the tables and popping up pop-up walls. It was starting from scratch. Back then, Austin didn’t have a lot of galleries. If you wanted a gallery show, you were an established artist and you’ve had a career for years and years and years, and you build those relationships. I was not there yet. My other option was to do this thing called East Austin Studio Tour (now just Austin Studio Tour), which was a yearly tour they did up until the pandemic. Venues around Austin would open up for artists. The first one I did was at a comedy club. During the day they let all the artists have pop-up tables and show their artwork, then at night, it turned into a venue where they’d have comedy shows. So that’s just how it is. It’s very innovative. They wanted to give space to artists and wanted artists to grow, but it was also kind of hard to establish myself on a national scale. That’s when I really started applying to national group shows and all that – just trying to branch out. 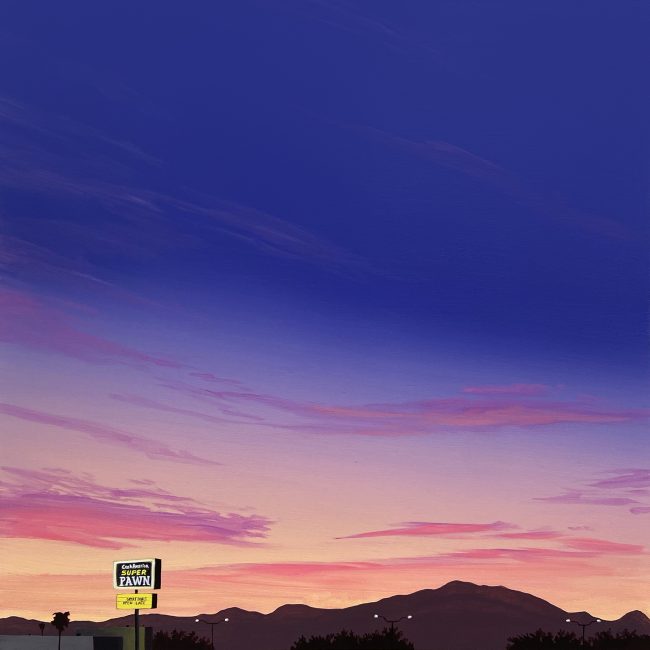 What’s the most helpful thing that you learned in art school?

I would say the most helpful thing I learned in art school was theory and critique. It’s funny that I’m saying that now because when I was in art school, I hated those two things. I was 23 when I went into grad school, so I was one of the youngest people in my class. That was really intimidating. I was still learning who I was as an artist and then to be thrown into theory discussions and six-hour critiques…it was a lot. The way I describe grad school for me is that it was like being broken into a million different pieces, learning a million different things, and then figuring out how to build myself back up again and hone in on what was useful for me. It led me to who I am as an artist now.

What are some of your film influences?

I actually love horror films. I love seeing Kubrick – The Shining is probably one of my favorite movies – and I will say it’s mostly because of the way he shot that film. It’s very cinematic. It’s very ominous the way he frames things. I really look at framing when I’m watching movies. Alfred Hitchcock – I know it’s kind of old school, but his films are also a big influence for me. I did my grad thesis on Rear Window. And then Wes Anderson kind of pops in there.

Your paintings feel uniquely American. Are you ever curious about how people outside the U.S. would view your work?

A part of what really keeps me going is the conversations I get to have with my collectors and the experiences that they share with me. I’ve been surprised by international collectors because a lot of them love that nostalgic American landscape look. A lot of American culture does permeate other countries, especially in film. There’s something about Americanized culture – even with fast food – it’s inspirational to them. People love it, and it reminds them of the movies they enjoy. It’s like this overall Americana nostalgia vibe. Globally, it’s been influential and that’s pretty cool. 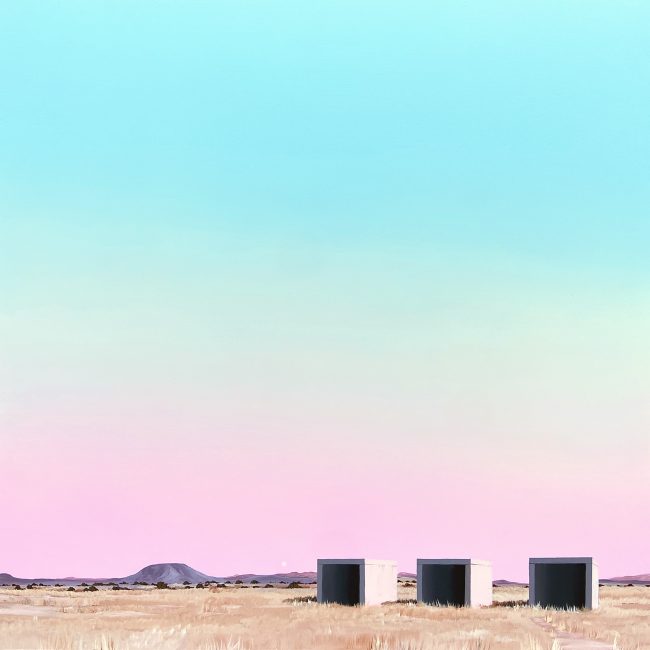 You definitely capture a moment in time in your paintings. Because it feels so normal or mundane, also makes them super nostalgic. Do you feel more drawn to the visuals of these spaces or that nostalgic feeling?

I would say it’s both. I think all my work is personal. There’s a small element of each that’s personal and that permeates through why I choose the reference images I choose to paint from. A lot of them are my personal travels and honestly, me with my iPhone snapping pics while I’m on a road trip. It’s really about a personal connection and how I framed them. I’m sure you’ve noticed – they’re all squares. I framed them that way because it creates this huge void in the sky and it places the viewer in the space that I was also in while taking that reference photo. That’s important to me – for my viewers to be sucked into the painting and feel that energy from it.

Does looking for inspiration ever get distracting?

Yes, especially driving. I pull over a lot. It’s part of my work. I’m constantly just absorbing the environment around me visually. Luckily, nowadays we have a camera in our pocket all the time. If I do see something that could be a painting or at least influence a painting, I’ll pull over and snap a pic. I’ll also stop the group of friends I’m with or stop my husband and say, “Hold on a sec, I got to take a picture of this.” It happens every day. It also happens when I’m traveling. Sometimes I will specifically travel, like to Marfa or to LA, to photograph specific locations that I’m interested in. A lot of it is about spending time in the spaces that I paint. That’s important to me also. 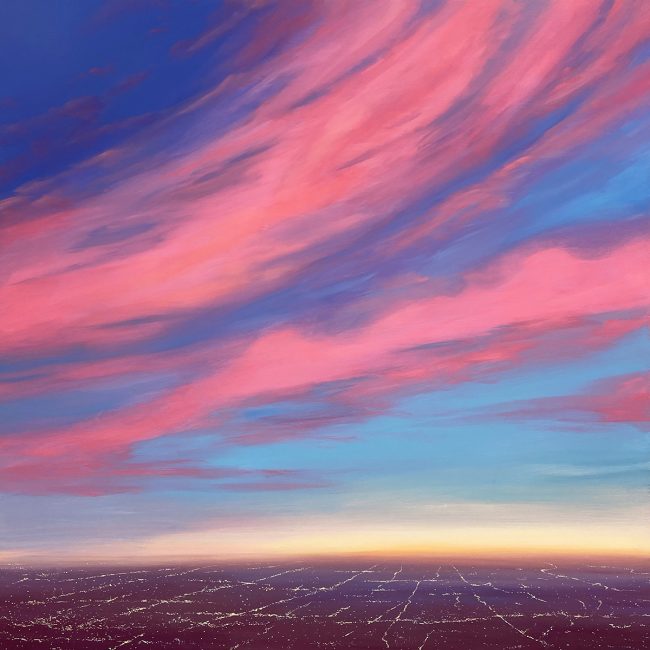 I imagine there’s a big difference between painting something you’ve physically seen rather than using a random reference photo.

It’s interesting because I’m always having a conversation about photography and painting. In grad school, my professors would ask me, “Why not just show the photo?” This is where I always turned to Gerhard Richter. He’s one of my favorite artists. He works from photos as well, but he does something where he kind of puts a veil over the photograph with the painting. That’s kind of the way I look at it – taking the photo I’ve taken on vacation or out in the world – and with painting, taking bits and pieces that I feel are important and translating them for the viewer. Sometimes if I take a photo and there’s a stop sign or something that’s in a weird spot, I just won’t include it. I’ll let the painting do its thing and edit it out from the photo. So, there is a translation that happens between the two. Something I find interesting is that if I do compare the final product with the pictures I’ve taken, they usually don’t look super similar.

Are there any places you’ve been dying to capture or have plans to capture?

Yes actually, New York is one of them. New York has such a cool history and it’s an interesting landscape to make my type of painting from because of the way I’d have to frame them. I’m curious what that would look like. Iceland also keeps coming up. It’s not America, but I think eventually my work will evolve to not just be American paintings. I really could go anywhere and I love what I do for that reason. There is no limit.

What are you working on right now?

I have a solo show opening in February with Jonathan Ferrera Gallery in New Orleans. Other than that, there’s a couple of things on the way. I don’t like jinxing things so I won’t be super specific, but stuff’s happening.